Jump to the latest updates

The latest from City Hall and candidates' headquarters

Headed to the SD73 school board will be O'Fee, K. Karpuk, Grieve, Hickson and Kang.

Jo Kang has reclaimed fifth spot in the trustee race, now leading by about 270 votes over Anderberg in sixth place.

The council race remains in the same order, with Neustaeter, O'Reilly, Sarai, Hall, Middleton, Bass, Karpuk and Bepple in the top eight. Sunderman trails the top eight by about 500 votes.

8:53 p.m. — Dudy movies closer to Hamer-Jackson, but still trails by about 350 votes, with 14 of 21 polls reporting. Polls from Aberdeen and Dallas are expected next.

8:45 p.m. — Three further polls have reported (9 of 21). The mayor's race has grown closer, but the order remains the same, with Hamer-Jackson showing a 550 vote lead over Dieter Dudy.

In the council race, Randy Sunderman now trails in ninth place, with King and Giesbrecht dropping in spots.

Trustees remain in the same order.

8:20 p.m. — Council candidate Stephen Karpuk is running for the third time. He said he's "cautiously optimistic" because he put in more effort during this campaign. Karpuk received 6,334 votes in 2018 and was two spots out of one of eight council seats. He said he did more doorknocking this time and handed out more flyers. He said he worked on Saturday and plans to take down campaign signs after the results come in, even if he wins. He told incumbent Bill Sarai, an incumbent councillor seeking re-election, that he will grab a chocolate milk to celebrate if he wins because he doesn’t drink alcohol. Sarai apparently suggested an orange juice. 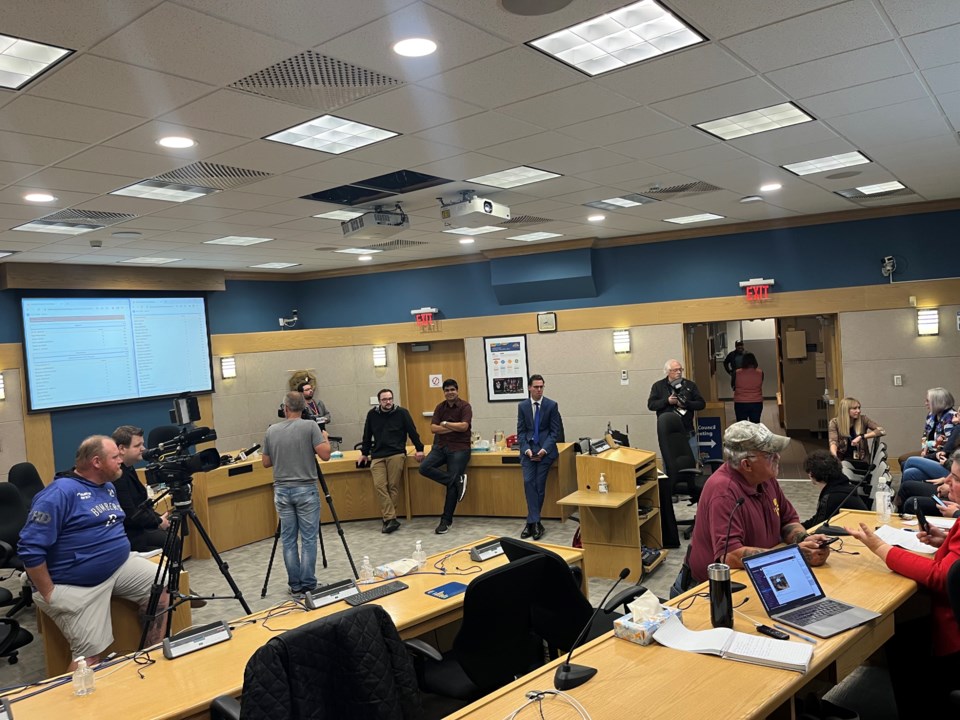 8:15 p.m. — Incumbent Coun. Mike O’Reilly attended City Hall just before 8 p.m. He said he took his son to the Farmers’ Market on Saturday and tried to treat the day like any other. He is encouraged by advanced voter turnout and said this election is different for him because he is running for the first time with a four-year resume, as an incumbent. At the top of his resume? The patio expansion program, record-setting business licenses, new playgrounds built and more. O’Reilly would not speculate as to who would win tonight. Asked what the council dynamic could look like if he were to become one of the most experienced people on council, he said: "At the end of the day, this is a team approach." O’Reilly said competitors during the campaign will become team mates.

8:06 p.m. — Katie Neustaeter is running for council. She is hosting a campaign event for her team at Bright Eye Brewing tonight and popped into City Hall ahead of the election results. Neustaeter has run an energetic election campaign, beginning from her campaign kickoff event. Neustaeter said she spent 16 to 20 hours doorknocking during the campaign and attended up to four events per day. She also attended all of the forums and filled out all of the questionnaires.

“I feel confident in Kamloops,” she said. 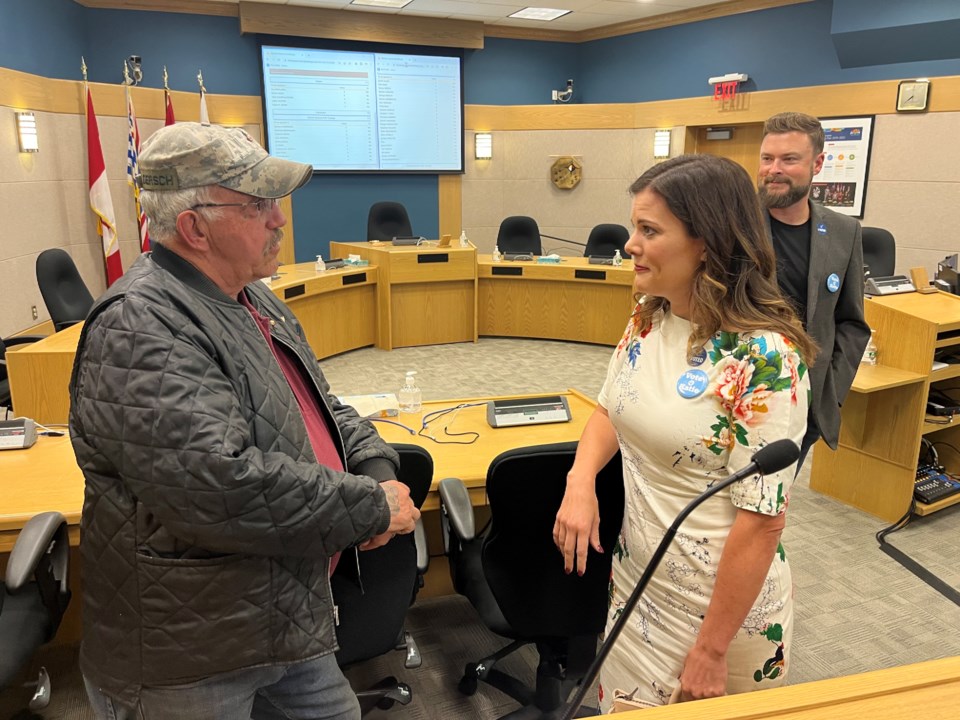 7:55 p.m. — With five minutes until the polls close, candidate for mayor Arjun Singh is at St. Andrews on the Square, posted up not far from City Hall in downtown Kamloops. Fewer than 20 people are in attendance, at this point, with music being played from the stage. 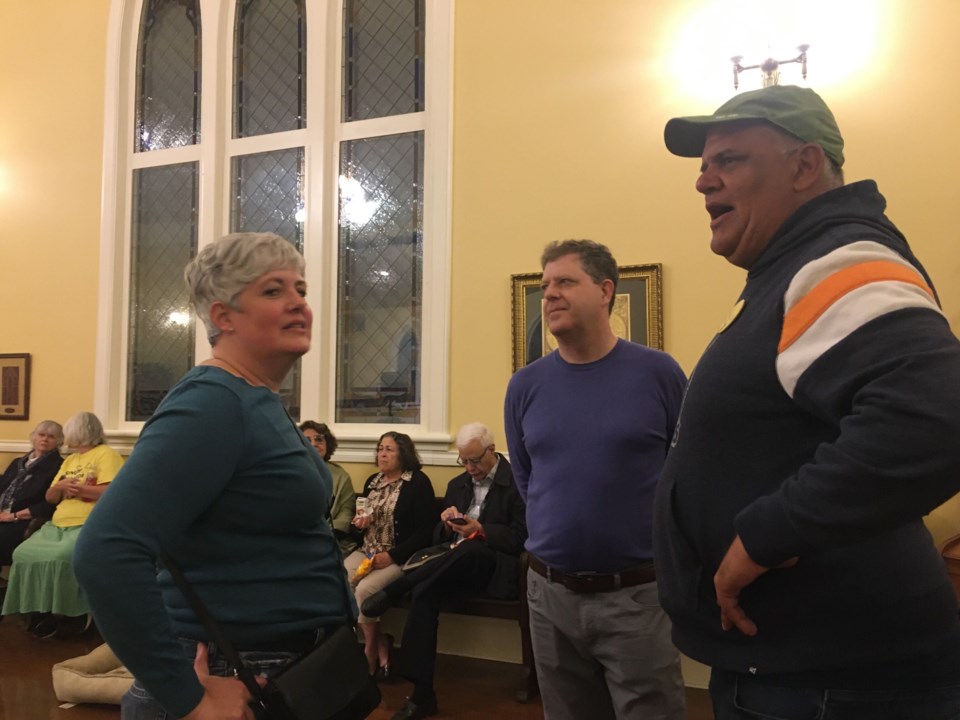 7:50 p.m. — George Dersch and Sgt. Pip, his service dog, are in council chambers. Sgt. Pip was laying on the floor in behind the chairs of senior city management.

"Win, lose, draw — it doesn’t matter," Dersch said. "It’s going to be fun." Dersch, who is a veteran, said he hopes whoever gets elected will "do the citizens proud."

7:41 p.m. — Candidates have begun trickling into City Hall ahead of the election results, set to begin arriving just after 8 p.m. They include council candidates Katie Neustaeter and George Dersch, along with his service dog, Sgt. Pip.

7:31 p.m. — Mayoral candidate Reid Hamer-Jackson is hosting an election night get together at the Mount Paul Golf Course clubhouse. About 40 are in attendance, including council candidates Caroline King, Dennis Giesbrecht and Darpan Sharma, but Hamer-Jackson is not yet among them.

"I like politics. I like understanding about that kind of thing," he said. Kelm voted in the NorKam secondary mock mayoral election. The results will not be available until next week. He said he voted for Arjun Singh but he thinks it will be a tight race tonight.

7:08 p.m. — At a Coast Kamloops Hotel ballroom, Ray Dhaliwal says he's excited and nervous. About 50 in attendance, with music playing on the loudspeakers.

7:00 p.m. — Welcome to KTW's coverage of the 2022 civic elections. Tonight, one mayor, eight councillors and five school trustees will be elected in Kamloops. Leading candidates will be listed above as the ballots are counted, with final results expected after the polls close at 8 p.m.

KTW reporters Jessica Wallace and Michael Potestio are in the field, ready to hear from the candidates as results come in.